Turtles all the way down

This one painted itself.

When the directions come from the intuitive (not the intellect) I say the painting painted itself.

If I suffered from grandiosity as some artists do, I would say God directed my hand.

It began as a painting of Minyon Falls near Lismore, (see pastel study)

However, the raw rock patches from where large chunks of cliff face have recently fallen enticed me to create chapels.

A tower of something began to insinuate itself in the centre.

I recalled the (apocryphal?) story of the young Bertrand Russell : how he had been giving a talk about the universe, and a little lady stood up and said its all very interesting, but he should realise that the universe is carried on the back of and elephant, which is on the back of a turtle…

“Interesting indeed,” remarked Bertrand, “ and what is under the turtle?”

“Another turtle” she replied.

“Aha! And under that turtle?” quizzed Bertrand,

“Oh you clever young man!” she exclaimed, “Its turtles all the way down!”

and that settled the matter of the central tower.

The issue of the origin and structure of the universe according to various mytho/religio/superstitions became the theme. The chapels became temples to different deities, and the turtles version, which seems more plausible to me than the others, extends downwards to the centre of the universe, if not beyond.

On the left is Mother Natures version, and her deity; the Great Elephant Parrot came and perched on a marble cloud ( supplied by Bernini) 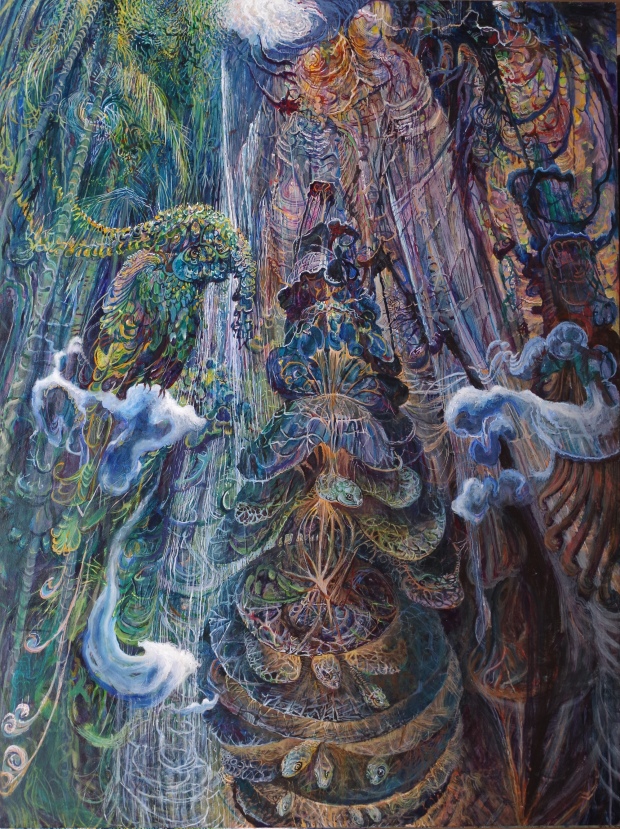