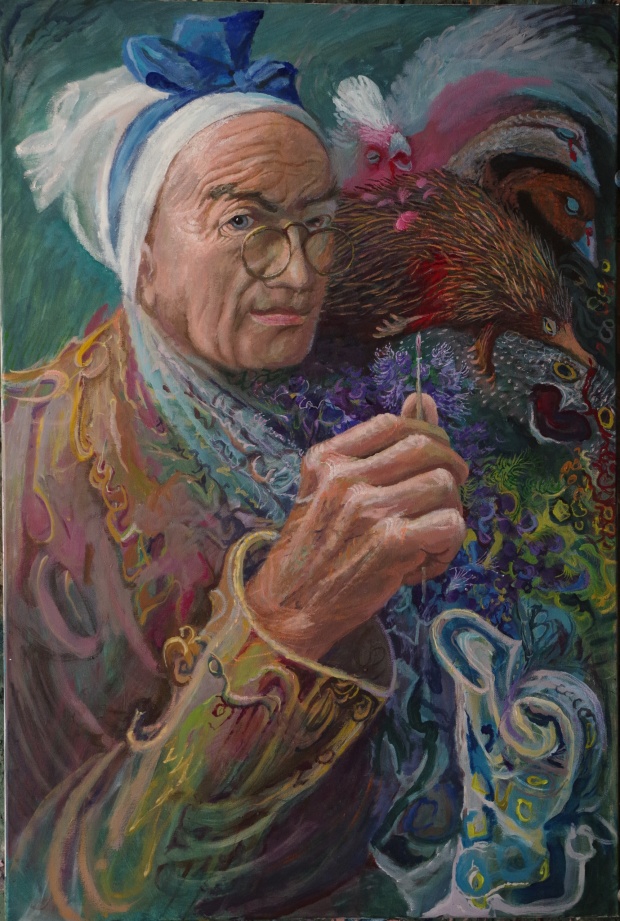 Did Chardin really feel sorry for the dead creatures he brought into his studio to paint in his still lifes? (as certain Art writers suggest)

Or were they just his dinner that night (he didn’t have a fridge).

I feel disturbed that many European countries still allow people to go out and shoot wild creatures.

This cannot be civilised. Yet they even call it their ‘culture’!

How many other attrocities and ludicrousities can we think of that are perpetuated in the name of culture?

If I invited Chardin to Big Bush would he go out and shoot creatures?

I took a pastel Chardin did of himself in his old age and put my eye, and my hand into it.

And posed a few questions.

No Galahs, Wood ducks, Frogmouths or Echidnas suffered in the making of

One of those paintings that needs a caption to put the viewer on the right page, but having provided that, need I say more?

Maybe this one began with a book I got about Nightjars, Potoos, Frogmouths and Owlet- Nightjars. Their plumage has such exquisite camo patterns, that my passion for butterfly wing patterns momentarily took second place .

Also Mark Rothko. I became aware of his work when I was in my thirties. It was after I left Sydney, which was then embroiled in “The Field” art… Exciting enough stuff: clever things being done with masking tape and sprayguns: “Hard Edge”

Only to get a magazine (Art International) with a Rothko issue.

This bloke was using blocks of colour with effervescing edges to evoke emotions that I’d never had before. His paintings bypass the intellect and connect with the soul.

Over the years I have begun a few paintings with the intention of presenting full frontal slabs of colour; but inevitably the boundaries get vioated as I (have to) sneak in recognisable things.

Same with this one.

Nonetheless there are pale moonlight colours along the top; warm dry grassy tones along the bottom; and in the middle a dark shadowy “whoosh” going from right to left. Then I mingled nocturnal feathers with Big Bush bark and foliage.