As I pen these lines I am working on new jobs in a sense of “thinking about” rather than “looking at” wherein, for example, the horizon is being de-horizontalised, and the landscape curled up a little like in dreams or memory.

Often something I am putting in a painting makes me think of something else; so maybe I try to include both.

Also I am thinking about hills and rocks as painted by certain other artists; to wit:

Goya: the gravity-taunting bluffs and mountains in some of his outdoor works (the like of which I have seen in real life from train journeys in Spain)

Caspar David Freidrich: He was spellbound by nature and mountains; but mostly couldn’t disentangle the Christian church from it. Still plenty like him around today.

Whiteley: the deliciously unhinged other-planetness of his landscapes.

He could make a landform take your breath away. His infinitely variable scale (from mountainsides to ant’s livers), compelling focus, extra-dimensional dynamics…

G.W. Lambert: The virtuoso brushwork and mental control of his plein air war paintings done in the Middle East, and the idyllic landscapes in which young Australian men are being killed during the landing at the Nek, Gallipoli. He got a buzz out of the trees making dots on distant hillsides.

Cezanne: the grumpy fumbling, groping and caressing after his “petit sensation”. (Not the simplistic, peurile “cube, sphere & cone” that artwriters waffle about.)

I keep thinking of Mt Sainte Victoire (also seen from a bus.)

My Mt Sonder makes me think of Mt Sainte Victoire, except my stuff is pre-human.

Gruner: Like Cezanne he lived on the buzz he got from perceiving and delineating the patches of colour and form in his landscapes. Also the taking-away-of-breath that a delicious expanse of volume gave him (and us). He once declared that earth anatomy was all that interested him (after an aeroplane flight) 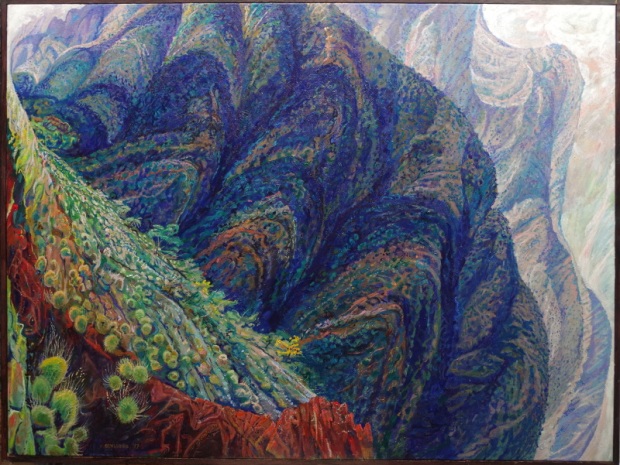 A range within the Western Macs. One ridge was in cloud shadow when I beheld it; behind it the more distant Mt Giles is in sunlight. I rolled up the ends just a little; and I enjoyed dehorizontalizing the horizon. I felt Gruner’s gaze upon me a few times. 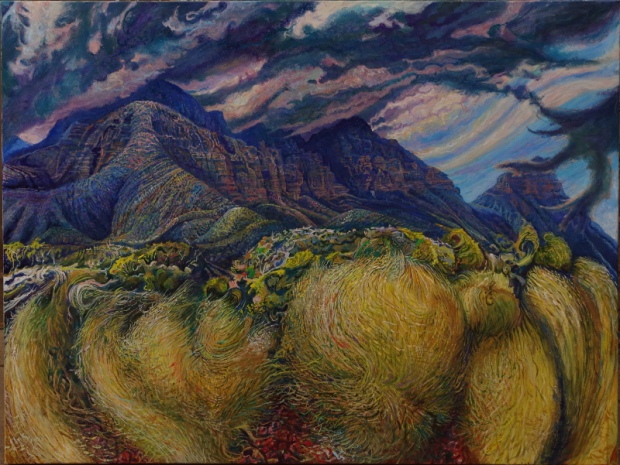 On a windy morning with low cloud I did a drawing with the foreground trodia (spinifex) doing etherial swirls; Across the centre of the painting the peaks are in deep shadow but very solid volumes; then the rising cloud takes over again, swirling along the top of the view. Back in the studio, making a painting out of this idea, the spinifex, hills, clouds are becoming zoologique.

This is one of those paintings that doesn’t want me to finish it. (“…don’t finish me off!”)

It seems to live only while I am still working on it. 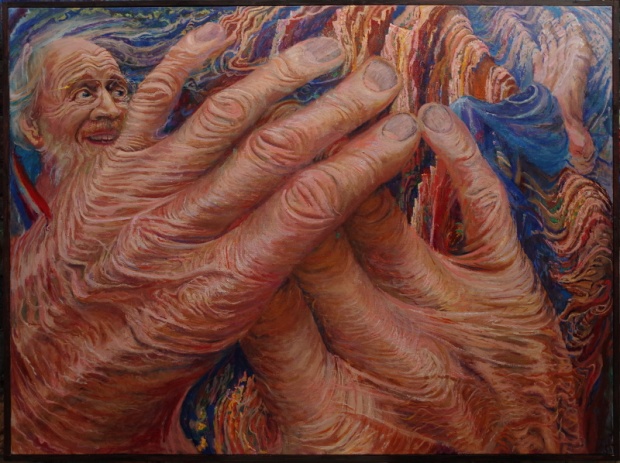 When all’s said and done I’m really pointing out that certain ridges in the Western Macs look a bit like my old knuckles.

And yes, I am doing a self portrait of my hands… 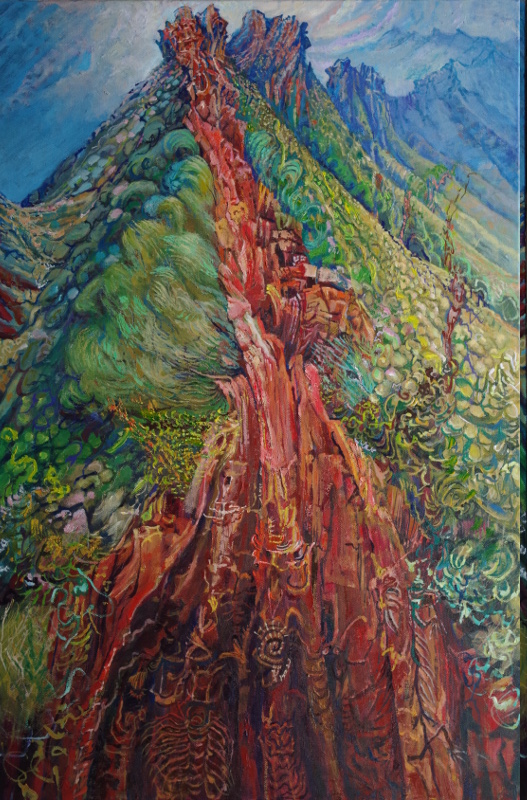 The human race needs a kick up the bum.

We are enslaved to consumerist capitalism. Obsessed with self, wants and don’t wants, games, entertainment, material self enrichment. And those who don’t have it, want it.

The superstition and gullibility of the human race is quite astounding; and it allows manipulation by the more cunning of us; hence the booming consumerist capitalism and our enslavement.

A frightening/depressingly large percentage of people lack the mental capability or stamina or willingness to comprehend even the simplest concept, eg:

How is human-generated CO2 gas affecting the climate?

What does alcohol do to the brain? The family? The community?

It seems the only goals worth striving for at school are in sport (which is make believe), and neo-liberal endless accumulation of wealth (which is unsustainable and immoral).

Indeed a large percentage of what people aspire to, and hold up as worthy goals is pure make believe.

Much of the work done in the “work force” is also make believe. Fake productivity. Not to mention environmentally damaging.

So effective is our brainwashing into consumerism; we consider it our right to waste resources in order to appear wealthy and successful.

To be required to conserve resources and control population would be considered an assault on our rights, and an injustice.

Regulations and codes have been put in place (pressure from lobbyists and parasitic industries) to ensure that the public consume wastefully in the name of standards and safety.

We are intimidated by academics, statespersons, religions and even some scientists into not regarding population and economic growth as a threat to the planet and all us creatures who live here.

The sector of the community that realises that the planet and its resources are finite and running out, seems to have no connection with the sector that lives by the superstition of economic growth.

But worst of all, we are encouraged to tell lies. Success comes only to those who tell lies.

Modern society believes nature and the rest of the universe (ie EVERYTHING except humans) is a free resource to be exploited by humans, but otherwise only of entertainment value. Any lingering connection with “nature” is via tv documentaries; but otherwise nature is “out there”, not really part of reality, uncivilised and unhygenic.

I offer this painting as a yardstick against which to measure reality:

The first hurdle is the here-and-now trap. Humans have been around for a very brief time. About a million years. Insects for example, have been around many hundreds of millions of years; likewise birds, trees etc… They have been “getting it right” and surviving for hundreds of millions of years. This “knowledge” incorporated in their DNA is worthy of respect and veneration. The natural systems that keep the planet working depend on lots of living creatures, (even in human’s insides!)

And its not all just for us humans.

We are part of it willy nilly. We are the johnny-come-latelys.

Indeed if this information were compiled into some ancient holy book, it could be the basis for a religion with ceremonies, rituals, dancing and singing and the repentence and forgiveness for our sins against the environment.

But being based on fact, this religion could be a cause for goodness and wisdom and compassion, instead of exploitative mischief and nonsensical superstition. But I digress…

In this painting we have a vertical stratum of rock, laid down as horizontal mud sediments on the bottom of a primordial sea hundreds of millions of years ago, compressed and incredibly transformed into rock, then (very slowly) flipped 90 degrees onto its edge, then the surrounding stratae, slightly softer than the central ridge, eroded away, and this ridge is how it looks at this moment.

This took hundreds of millions of years. And during this time Australia moved across the equator, visited the south pole, and more…

During all this time millions of creatures evolved and populated the planet. Some of their dead bodies settled in the mud and became fossils in the rocks here.

Gaze upon it, dear humans, and try to find some humility…