I like to set up a table and do a dozen or so in one session that lasts several weeks. I have about three boards going at once; when I fix one and put it out to dry I resume work on another already-fixed job. Each work has gone through about four or five fixes by the time I deem it “finished”. Quite frenetic and exhausting.

Each pastel takes about three days; then I put it away and forget it. Later I am amazed to see them again. I really do forget doing (some of) them.

They are an opportunity to try out ideas and techniques quickly in a devil-may-care frame of mind. I can easily destroy fizzers and nobody will know; but in practice I mostly keep working on the would-be fizzers and get them looking OK, eventually. You can fix and rework a pastel surface about five times before it goes unreceptive (Even then you can cover the bad bit with pastel primer and start again)

Pastels are good for juxtapositions of seemingly incompatible objects, textures, colours, ideas. They can be about physical or mental juxtapositions. They are never studies for paintings although sometimes they begin as an exercise in drawing which develops a skill that ends up in a painting.

(eg “How can I draw the upwelling motion of cumulus clouds?”)

Sometimes I see something that cries out: “Do me in pastels!”

The action of dragging a stick of colour over paper and leaving a trail pregnant with possibilities; and then embellishing that trail until it accumulates into a readable image is very compelling and intriguing. I can do it for several weeks or months without getting bored.

When I finally go back to painting after a spell at pastels I’m a slightly different person.

This began with the orange cloud. How orange can I get it? I had photographed the katydid intending to do it up in pastel somewhere. As I fitted them together I decided to turn the page on its side and the horizon spilled off the edge somewhere which was amusing…thus began the end-of-the-world idea.

The katydid was waiting for the humans to wipe out themselves and most of the others; then it would repopulate the planet.

Another juxtaposition. I just threw them together and they sorted themselves out pretty well. Which just goes to show… 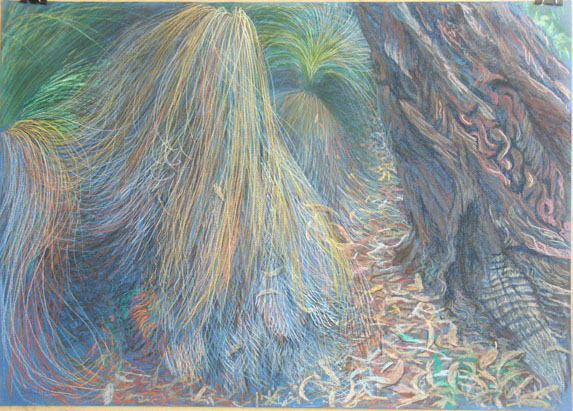 An exercise in juxtaposing contrasting forms: One filamentous and one blockybark.

Xanthorrhoeas never get boring. Its hard to walk by one without pausing to caress, admire, converse, wonder. Doing them in pastels is an adventure; I end up drawing each filament leaf not once, but many times, caressing in the changes in direction, colour. To get fine lines I turn the pastel sticks over and over to keep a sharp edge. Sometimes I use pastel pencils. 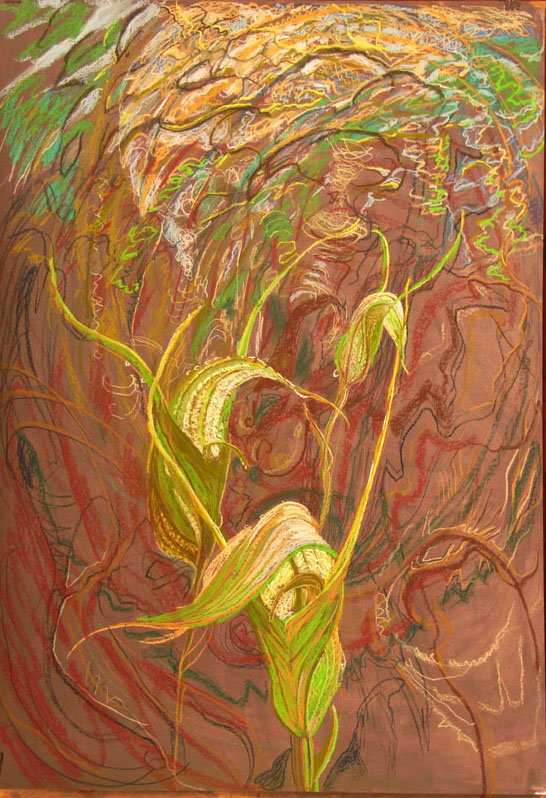 spirit world, and I wanted to do one up big in pastels. I wanted to construct a kind of pavilion around it to amplify, resonate, celebrate it. 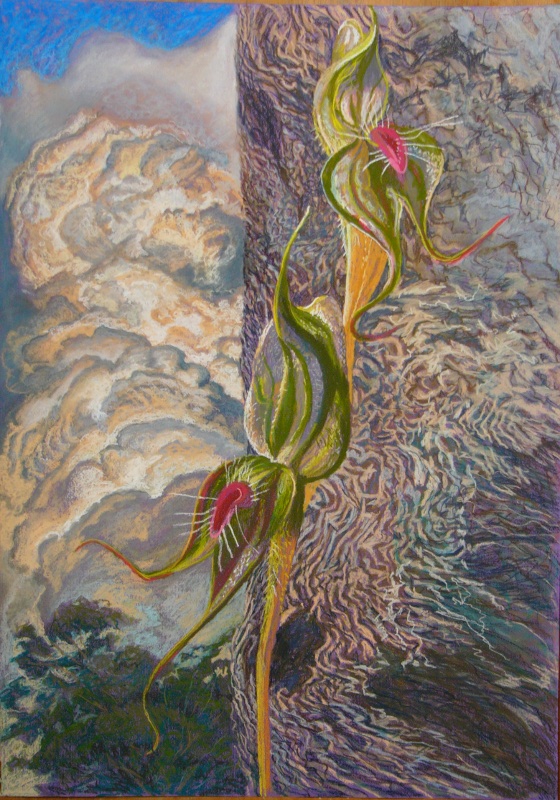 The light straight overhead. Not flattering for most objects but grey box trunks open up and reveal something. It is as if this is the moment they are in touch with transcendent forces. By two pm they are resuming their chalky inarticulate secrecy. 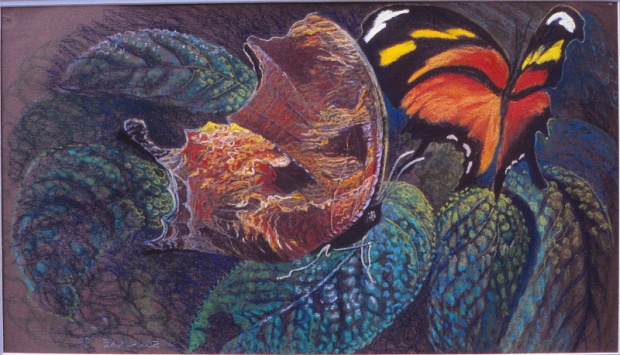 What can I say? I am quite besotted/besozzled by butterflies. They are messengers from another universe. I did three trips to the Amazon to enjoy them. I filmed many hours of video of Amazon butterflies, about which more another time.

A sweet mysterious little tree frog that is quite common in Big Bush, even away from water; Littoria peronii.

Equally mysterious and tantalysing is this orchid Caladenia alba that some years appears suddenly in great numbers. I use magnification to scrutinize them but all I see is their exquisite detail, not their real secrets.

When I was a little and not so little boy I was fascinated by certain works by Elioth Gruner. He could paint light and atmosphere like magic. Especially when looking towards the light. His Spring Frost at the AGNSW used to (and still does) attract me spellbound. There is fanatical dedication in his work that was a beacon to me. He too, was an alcoholic, who alas, never found AAs.

In this pastel I was thinking of him. Keeping the light source behind the trunk; revealing itself only by extending tentacles around the corners. 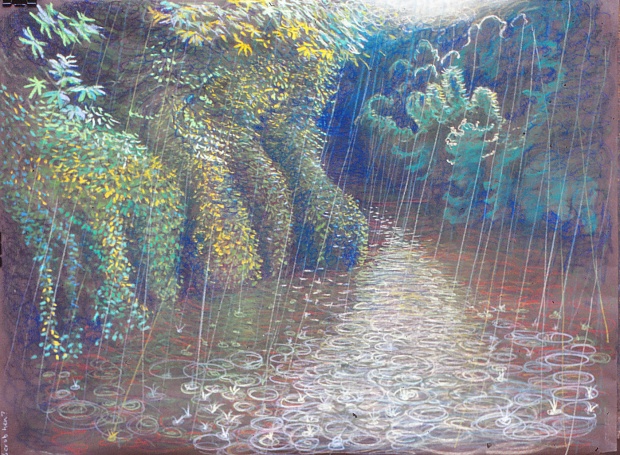 An Amazon job. About the loveliest phenomenon to be encountered in the Amazon is vines tumbling down into little streams. Especially when its raining and sunlight breaking through…a bit kitschy? Sometimes with lovely phenomena this has to be lived with.