Aunty Reta’s Sculptures on the Pinnacle

With this current painting I’m not sure if its a horse or angel of inspiration that’s doing the painting.

I cannot remember actually thinking up the idea. One minute it was not in my head; the next minute it was there, pretty well developed.

Aunty Reta’s sculptures on the Pinnacle.

I felt there were great prospects for putting a Trogon and a Pangolin amongst the sculptures. I made up a canvas and primed it in a fever of excitement and began from all sides with the canvas lying flat on tables.

Every time I go up to my studio I am not sure what I will do next, but confident that I will know without any doubts once I get started. So it has been up to now.

She was the one who looked after the aging and unwell in the family all her life.

The actual idea of her sculptures being on the Pinnacle was in a very early short story by Julian Halls.

In real life she never did any sculptures other than some quite strange unique ceramic forms (that made her giggle) in a pottery class I held long ago.

The Pinnacle is a hill that rises out of the plains very close to where I lived my first 17 years. I could climb to the top in about 40 minutes and I spent a lot of time up there. It was, and still is, a very special magic place for me.

Its cooler up there and when the air is clear the views are of maybe a hundred kilometres. Its hewn and conglomerated out of round riverstones. Bespangled with mosses and lichens; ferns growing in the cracks. There are some caves. There are many species of flora not in other bush around here.

In the warmer months there are several species of butterfly found only there.

Right at the top there are dozens, sometimes hundreds of butterflies hilltopping. (Flying above the treetops in a kind of ritualistic rapture).

Here are five photos of this painting as it developed. 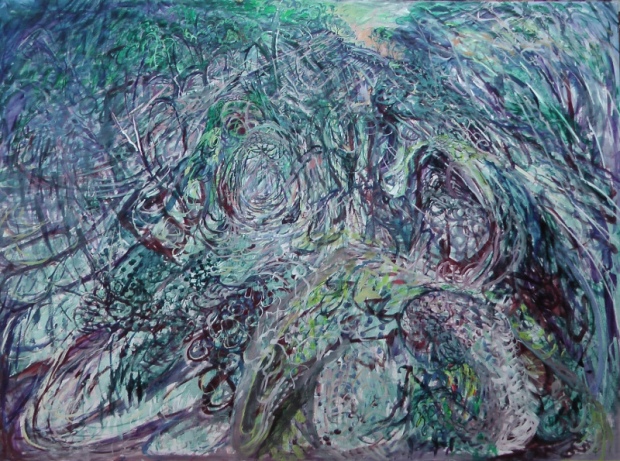 In the first one its only a few days old. Very exciting. It could go anywhere from here; but I still have some idea and control. 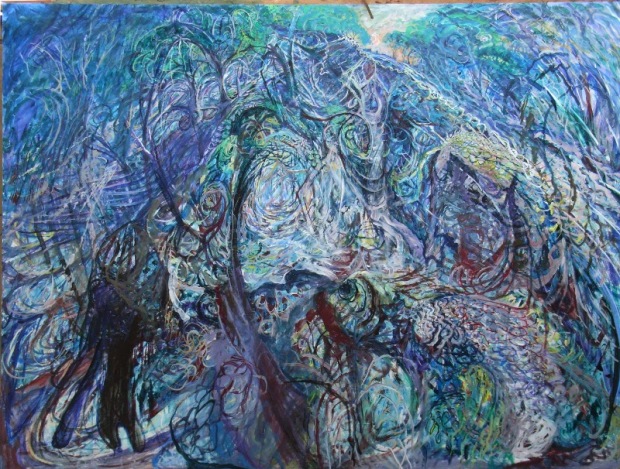 In number two I was beginning to try out the Trogon (a South American bird) and the Pangolin. Not sure though, how to orient the pangolin, and was there a baby on her back? But the lumpy conglomerate boulders that the pinnacle is made out of work nicely as the pangolin scales.

And the curious chapel begins to assert itself just left of centre. It had begun from the start as an accident, and I tried feebly to eliminate it, but not to be. Note the Boyd’s rainforest dragon on the pillar to the left of the chapel. I did that deliberately! 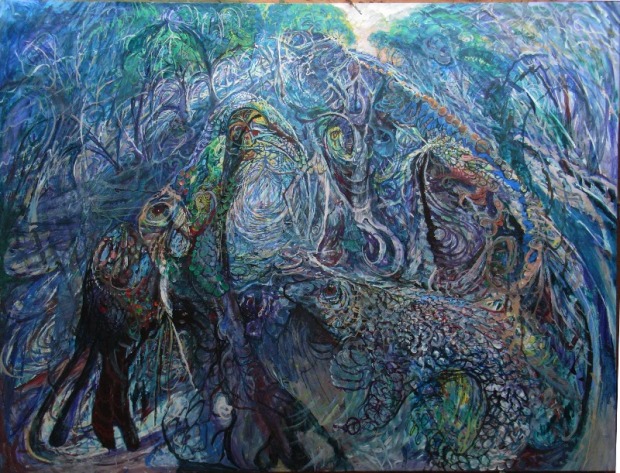 By number three the Trogon’s eye seems to have decided it is an empty socket, but further down a real eye opens.. Ah yes, an eye for the Pangolin has arrived.

And by sheer miracle a drop of paint flicked off my lovely Kolinsky liner and landed in the chapel. I quickly wiped it away, but it left a ghost of itself;

And behold! Its Aunty Reta herself, in her chapel.

Here is a close up 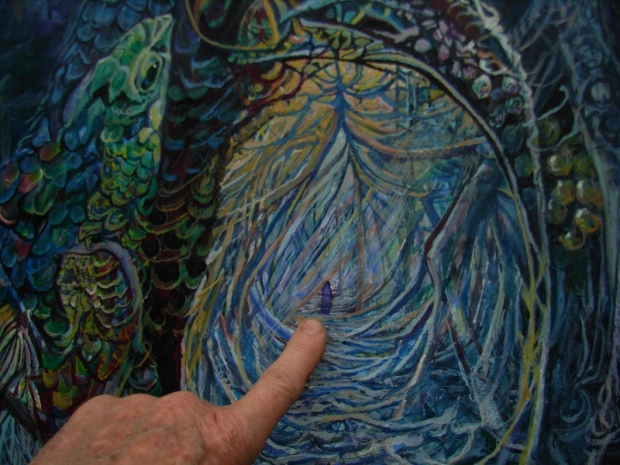 A Gaudiesque Guell Parc wall begins its construction along the ridge; branching into what could be a chameleon. 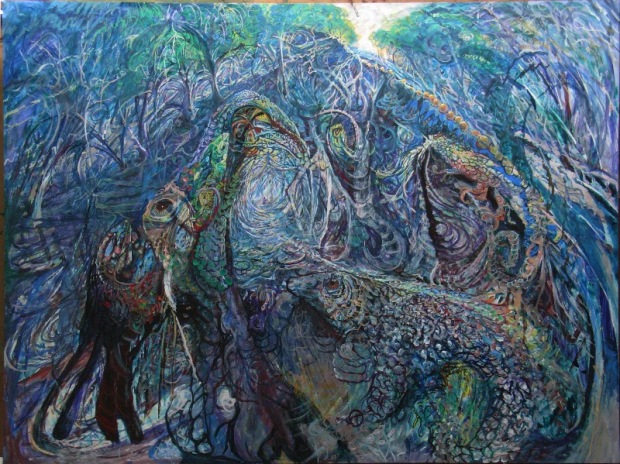 In number four a staircase cleaves itself up the Pangolin’s back, to allow Aunty Reta easy access to her chapel. I’m now asserting myself and trying to strengthen here and edit out there to make the painting more readable. 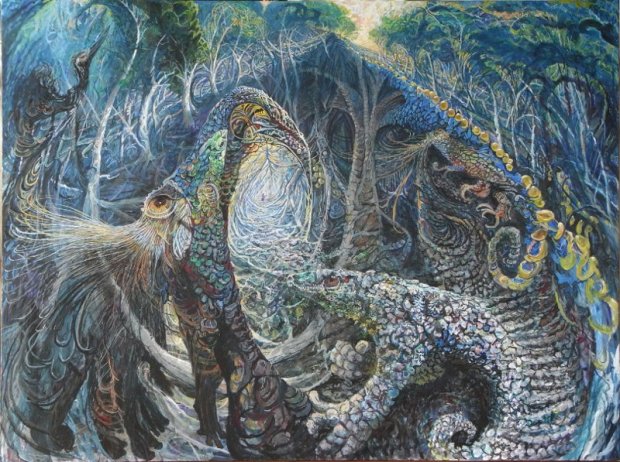 October 2012. Here is the final version.

This is probably the only time I will publish unfinished works.

Certainly there are aspects of the earlier stages that I like quite a bit; though I am most pleased with the final and glad that I ran with it all the way.

However there are people out there; especially those who have gone to Art School, (Now UNIVERSITY) who would have been brainwashed into believing that art should be rough and unfinished and there should be no evidence of industry or effort or refinement. And these people will point to early stages and declare with solemn authority that it was better in its early stages.

Something like this happens in my studio. Certain people look at unfinished works and exclaim: “Don’t touch it!” and move on insouciantly.

Such people are immune to debate or reason.

Which lures me on to wonder if most people’s idea of what art is (including, nay, especially artists) is no more than brainwashing.

Which lures me further to speculate if the same applies to other fields of learning. 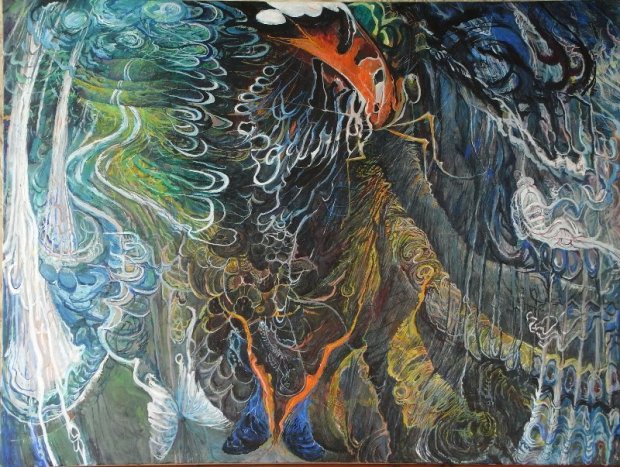 Simultaneously I was working on this one: Legend: The Shiptons Flat Butterflies.

One of my fabricated legends.